Precisely at 3.00am on Friday 24th July 2020, Ben Jipcho breathed his last. He succumbed to his death due to multiple organ failures while undergoing treatment in city of of champions: Eldoret.
Born on 1st March,1943 Jipcho is regarded as one of the first iconic pioneers of middle and long distance running in Kenya.
A story is told, of how he teamed up with Kipchoge Keino in 1968 Mexico Olympics games to  deter Jim Ryun of USA, victory in 1500m. Ryun was unbeatable due to his ferocious kick.
It was almost the start of 1500m finals. Kipchoge and Jipcho were representing Kenya, but Kipchoge was nowhere to be seen, not even  in the warm up track. Officials were forced to look for him everywhere, but in vain.

Finally Kipchoge a lighted from a bus and dashed towards the track; he was late coming in from the Olympics village. No sooner had he reached the the track than the finals began.
Jipcho set out a world record pace crossing 400m in 56 sec and 800m in 1:55.3. So blistering was the pace that, it 'killed' everyone. It was after 800m that Kipchoge took over and never relented, coming home in scintillating 3:34.91, something unfathomable in high altitude. 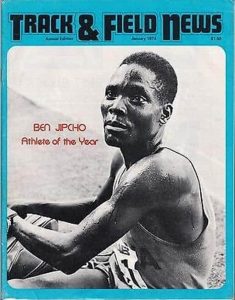 Their matrix worked, they neutralized Ryun' s devastating kick, though Jipcho finished distant 10th. He later apologized to his friends, due to the role that he played as a rabbit.
Coincidentally Jim Ryun was being awarded presidential medal of freedom, on the same day when Ben Jipcho died. It is unfortunate that Kenya did not honour the fallen hero, the best they could do was to offer condolences to the family.

Other accolades of Ben Jipcho includes, Silver medal in 1972 Munich Olympics games (5000m). In Christchurch 1974 commonwealth games he won two gold medals in 3000m s/c and 1500m. While 1973 All-Africa-Games held in Lagos he won two gold medal in 5000m and 3000 m s/c
The reason we have formidable athletes from Mt.Elgon region today is because Ben Jipcho played a critical role in setting the precedence, not only in athletics but also education sector. May his soul rest in perfect peace.